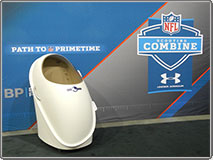 For the eighth consecutive year, the BOD POD® was the exclusive tool for body composition testing at the NFL Scouting Combine.

COSMED USA, Inc., manufacturer of the BOD POD body composition tracking system, and the Combine established this joint initiative in 2006 to assess %Fat, Fat Mass, Fat-Free Mass, and Total Body Mass in athletes. This information greatly benefits coaches and teams in preparing for the Draft, and increases athlete awareness of the effect of body composition on their performance, longevity, and overall health.

BOD POD data from the Combine show an increase in performance from athletes who fall at or below position-specific body composition norms. This trend of relating to fat-free mass to athletic performance is known as leanness to performance. Athletes in this category consistently perform better in speed, strength, and explosiveness tests, often due to strict diet and exercise programs. Results from the past 8 years were also compared to the number of years and games played in the NFL. This analysis showed a correlation between fat-free mass and longevity in the professional ranks. This finding is of tremendous importance for the training and evaluation of players, and supports the concept that a fitter athlete will last longer.

Complementing Gold Standard body composition assessments with the BOD POD, COSMED is also at the forefront of diagnostics for the measurement of Maximal Oxygen Consumption (VO2 Max) and Anaerobic Threshold (AT). Scientific research indicates the need to assess these variables in football players to develop training programs aimed at improving their cardiovascular fitness. Doing so results in players that maintain a higher level of performance during games as the season progresses, and over several seasons. These measurements also provide a baseline to quantify cardiopulmonary capacity loss due injury, aging, or non-compliance with off-season conditioning.

Interestingly, it has been shown that veteran NFL players have better cardiovascular fitness than rookies, leading researchers to conclude that "a high level of cardiovascular fitness may also be a factor in who succeeds on the playing field" (Am J of Sports Med). This presents an opportunity to further improve performance through the assessment, tracking, and use of VO2 Max and AT, along with body composition.

To learn more about BOD POD testing at the NFL Combine and COSMED's cardiopulmonary assessment products contact us at 1-800-4 BOD POD or fill the online form at www.cosmed.com/sales