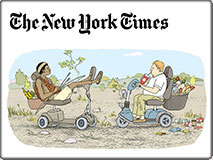 New York Times article presents a study where energy expenditure and other physiological data of hunter-gatherer populations are compared to their Western counterparts.

The article of the NYT is written by Herman Pontzer (Department of Anthropology, Hunter College, New York, USA), who was among the team that lead the scientific study.

The main objective of the study wwas to determine those aspects of Western lifestyle that are impacting on our species and pose the greatest risk of obesity. To evalutate this, it is important to study and compare daily energy expenditure and physical activity level of a non-Western population. Hadza are one of the few remaining populations of traditional hunter-gatherers living in a savannah-woodland environment in Northern Tanzania.

Studying diet and metabolism in Hadza foragers allowed the researchers to test the hypothesis that hunter-gatherers expend more energy each day than subjects in market and farming economies.

The measurements of TEE among Hadza hunter-gatherers challenge the view that Western lifestyles result in abnormally low energy expenditure, and that decreased energy expenditure is a primary cause of obesity in developed countries.

The full scientific artic can be downloaded free of charge at the following link: click here