The path to the NFL Draft continues at the Combine in Indianapolis, where more than 300 top prospects will continue on their quest to achieve their NFL dreams.

COSMED will be at the 2014 NFL Scouting Combine for the 9th consecutive year, providing the BOD PODs that will be used as the exclusive tool for body composition testing of the nation’s 335 most draft-eligible players.

COSMED USA, Inc., manufacturer of the BOD POD, and the Combine established this joint initiative in 2006 to assess %Fat, Fat Mass, Fat-Free Mass, and Total Body Mass in athletes. This information greatly benefits coaches and teams in preparing for the Draft, and increases athlete awareness of the effect of body composition on their performance, longevity, and overall health.

BOD POD data from the Combine shows an increase in performance from athletes who fall at or below position-specific body composition norms. This trend of relating fat-free mass to athletic performance is known as leanness to performance. Athletes in this category consistently perform better in speed, strength, and explosiveness tests, often due to strict diet and exercise programs. 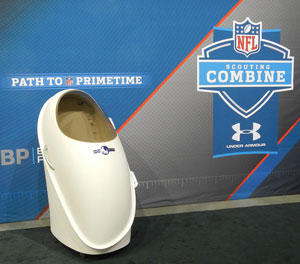 Results from the past 8 years (2,629 players tested) were also compared to the number of years and games played in the NFL. This analysis showed a correlation between fat-free mass and longevity in the professional ranks. This finding is of tremendous importance for the training and evaluation of players, and supports the concept that a fitter athlete will last longer.

NFL teams and NCAA programs currently using the BOD POD have a clearer picture of this draft statistic and what it may mean to a player's position on their roaster.

They also have a baseline assessment for managing the diet and workout regimens of their players and success on the playing field.

There are 13 schools with at least six participants:

Some Items of Interest