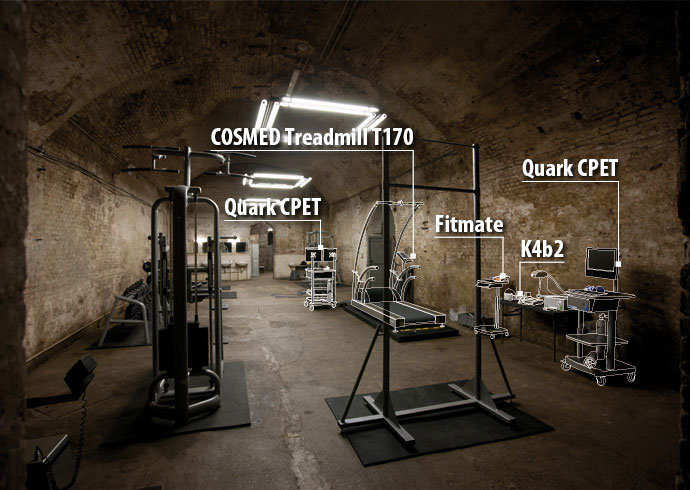 COSMED is proud to announce that it was selected to outfit the physiology assessment laboratory in the 23rd James Bond adventure movie: SKYFALL

James Bond movies have always featured leading-edge products and technologies. The selection of COSMED recognizes its innovative equipment and know-how in the field of functional evaluation and diagnostic technologies.

COSMED’s staff were on hand during the filming at the Victoria Tunnel locations in London, just across the London Bridge, to help with all technical aspects of setting up and running the equipment and ensuring great authenticity in the way the tests are conducted.

We hope results can thrill theatre audiences worldwide as they see which type of examination we should perform to know how fit and physically capable Bond or any other normal person really is. All this can be available in SKYFALL, the 23rd James Bond adventure movie, a unique opportunity to make a large audience aware of a type of assessment usually domain of niche and highly professional markets.

About SKYFALL
Daniel Craig returns for his third film as James Bond 007 in Skyfall, the 23rd adventure in the longest-running film franchise of all time. In Skyfall, Bond’s loyalty to M is tested as her past comes back to haunt her. As MI6 comes under attack, 007 must track down and destroy the threat, no matter how personal the cost. The film is produced by Albert R. Broccoli’s EON Productions, Metro-Goldwyn-Mayer Studios, and Sony Pictures Entertainment, and directed by Academy Award® winner Sam Mendes. Alongside Daniel Craig as James Bond, the cast includes: Dame Judi Dench, Javier Bardem, Ralph Fiennes, Bérénice Marlohe, Naomie Harris, Ben Whishaw and Albert Finney.